is the name for stand-alone public toilets in France.
These were mostly pissotières on wide pavements
(particularly in Paris) or in squares which, in the late 19th century,
replaced the columnal, one-man urinoirs introduced in the 1830s.
The latter were transformed into Colonnes Morris which served as
surfaces for the adhesion of advertisements.


Vespasiennes took their name from the Roman Emperor Vespasian,
and became not just Encounter Facilities for gay men,
who called them tasses (English: cottages)
but also opportunities for soupeurs or piss-drinkers
to throw in a crust of bread at some time in the day
and retrieve it, piss-sodden, some hours later.
To discourage homo-cruising, some could accommodate only two men
who faced each other, but were blocked by a solid dividing wall.

They were introduced elsewhere in Europe -
especially in Amsterdam - and even in Ireland!
Dublin had elaborate ones installed for the Roman Catholic Eucharistic Congress of 1932,
(other kinds of congress certainly resulted) -
but Belfast had a fine anglo-indian one (in harmony with that city's
hideous, pretentious and copper-domed City Hall) much earlier.
Strangely, I can find only one picture of it on the web: 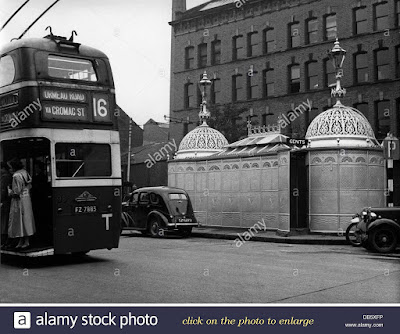 - which it shares with a trolley-bus.  It is, I believe, now languishing
in the Ulster Folk and Transport Museum about 20 kilometres east of Belfast.

The Paris vespasiennes have now disappeared,
initially because Mme de Gaulle was horrified by homosexuality.
(Click here if you can read French)
and I watched one of the last - a famous cruisy one in the Tuileries gardens -
being destroyed...

In the 1980s I met a very sweet pastry-cook in a 1950s concrete tasse in Le Havre
a communist city where they were slow to disappear)
and whence - extremely unusual in France - he drove me home to his bedroom
in the flat which he shared with his parents.

Marvellous twenty-first century single-man vespasiennes have recently been introduced in Paris.
What goes around, comes around. 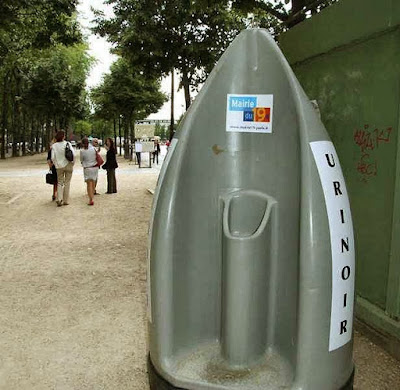 Some more examples here >
and here >