originally posted in the North-Jute newspaper Jyllands-Posten
are still causing havoc. - most recently the beheading of a secular schoolteacher
near Paris.

Until yesterday I had not seen any of the offending six cartoons. 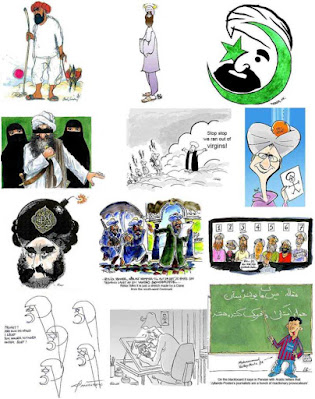 It seems that the cartoon which caused the most offence
was the one about the failure or rupture of the supply-chain of virgins in Paradise. 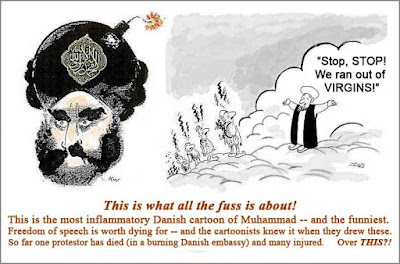 Jokes amongst Muslims about this ridiculous Hadith must date from at least the eleventh century.
Cartoons about the beheading of journalists, cartoonists or teachers may now seem to be in poor taste
but will probably not incite further beheadings. 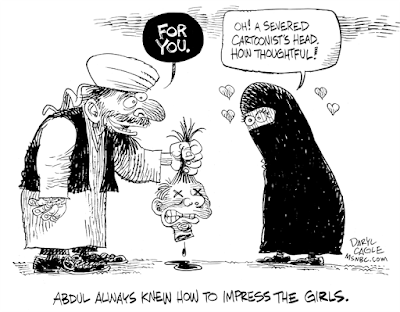 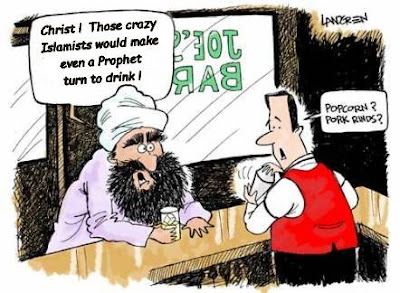 SHOULDN'T WE, HOWEVER, JUST ONCE IN A WHILE,
'SEND UP' SOME OUTRAGEOUS CHRISTIAN MYTHS ?
The caption below this superb painting by Bellini
could get me death threats from the crazy 'Christian Right',
but, fortunately, Freedom of Speech by millions means that
only ten people read my blog, none of them (so far as I know)
from the Raving Right (or the Loony Left).
I don't think that Jyllands-Posten , The Onion,
or even Private Eye would print it,
nor any schoolteacher parade it, as an amusing example of
our cherished and much-vaunted Freedom of Expression.