Some time ago I was given a Sand Painting which was signed
James C. Joe.  It languished in my cellar until recently,
when I looked up this guy via Messrs. Google.
It turns out that he is known among collectors
and the Navajo.  He lived in Shiprock (NM)
and may have been the first to make sand paintings to sell.
He has or had a son called Eugene Baatsolanii Joe
who is (or was) fully commercial.

Sand Painting was until quite recently a religious act,
part of a complicated rite involving chant.
The resulting images were destroyed afterwards.
Now, inevitably, they have become undervalued items of commerce.

Here is the painting in my possession.  It still has quite a strong religious element,
although it was not created as part of a soul-healing ritual.

I found a similar one via Messrs. Google : 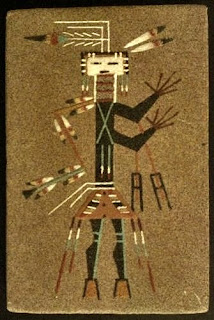 Later ones may be seen on https://rijim.com/navajo_art.htm.