Pessimism Is A Sin. 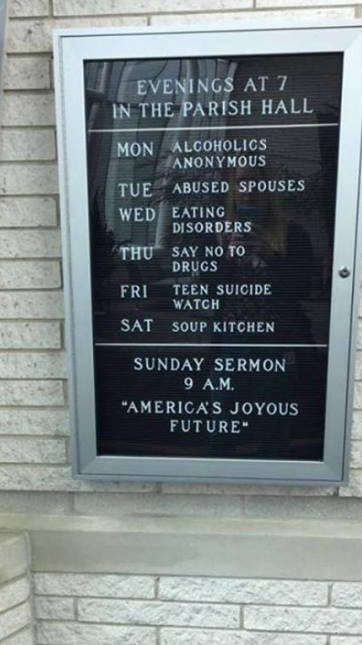 Alas, Auban, your irony here misses the point entirely, perhaps due--I am trying to be charitable--to the multiple, complex, paradoxical ironies of present American experience and American history, seen by you from far, far away and not lived in. Inaccurate perspective? This photo is an excellent blog contribution, but it has nothing to do with sin or pessimism. You could write a dissertation on its other ironies, however.

This program-board could well also be in Britain or Northern Ireland. Belfast alone might have twenty similar. The blog is not a so much a comment on America as on Christianity - "the Good News" which obliterated the best things in the Roman Empire (multi-faith multi-culturalism) and celebrated the worst : the pyramidal society ruled by an Emperor.

On the other hand, the US is the only country in the world (apart from North Korea) completely obsessed by "Patriotism", with flags everywhere and over three-quarters of the population voluntarily confined within its borders (i.e. passportless). As I have said before, North Korea and the USA are remarkably similar - though of course I have been to neither !!

One irony which you miss--I won't go to the comparison of USA to North Korea, primarily because you focus on bellicose details and not overriding and overwhelming disparities between the two countries--in this particular blog is the radical shift of using church rooms/sanctuary to create space for practical recovery and away from ideological salvation.

But using churches only for worship was and is rare. Like temples and ritual places before Christianity, churches were used for sanctuary and healing as well as fairs and all sorts of activities.