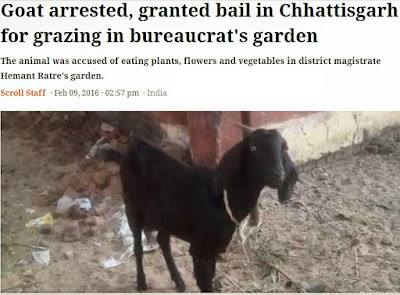 The Chhattisgarh Police arrested a goat on Monday for raiding a senior bureaucrat's garden in the Korea district. The animal was later granted bail after being produced in court, reported NDTV. The goat has been booked under charges that carry a two-to-seven-year prison term and a fine. The complaint against the goat was filed by district magistrate Hemant Ratre's gardener.
The police said that the goat was a "repeat offender". Assistant Sub Inspector RP Srivastava said, "The judge's bungalow has an iron gate and the goat used to jump over it and enter. The peon who maintains the garden had warned the owner of the goat many times. So, [on Monday], he filed a complaint and we arrested the goat and its owner."

The goat was accused of grazing in Ratre's garden and eating plants, flowers and vegetables. Its owner, Hassan, also faces charges of criminal trespassing and mischief causing damage. The court is set to rule on the case this afternoon.