Bear Kills Son and Herself On a Chinese Bear Farm. 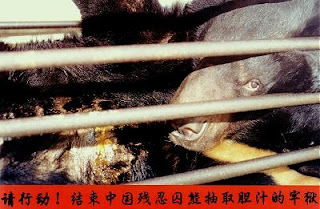 This Chinese bear, captured while a cub, will have spent almost its entire life in an iron straitjacket
while a dirty metal tube inserted by "superior" animals directly into its liver
drips "magic" bear-bile, like rubber to be sold as a fortifier to the rich...


"Amazing stories about the cognitive skills and emotional lives of other animals abound. Recently Chinese media has reported that a captive bear on a Chinese bear farm killed her son and then herself after she heard him cry out in pain when a catheter was jammed into his abdomen so that bile could be extracted from his gallbladder for human medicinal purposes. Around 14,000 bears are kept in horrific conditions and routinely tortured on Chinese bear farms. In this case 'a mother bear reportedly broke free after hearing her cub's cry, causing [bear] 'farmers' to run away in fear. She then ran to the cub's side and immediately smothered it, then ran headlong into a wall and killed herself instantly.'
"Captive bears spend upwards of 30 years in tiny cages where they can barely move their head and neck to feed and drink water. As they get larger the bears are crushed in their cage so that more bile can be squeezed out. While the details of this case are still being investigated, most, if not all, of these bears suffer extreme psychological and physical damage, including severe depression, gnawing off paws, rubbing the skin off their face and nose on the bars of their cage, chewing on the bars and losing teeth, and banging their head into the sides of their cage. Liver cancer is quite common as well. The bile that is extracted is used for a variety of ailments in the name of Traditional Chinese Medicine, but there are more than 100 synthetics and herbs that are actually better and cheaper and experts agree that bile is no longer needed. Surely, it's time for a change.
I've worked with moon bears who have been rescued from bear farms at the Moon Bear Rescue Centre outside of Chengdu, China, founded and run by Animals Asia. To date they have rescued 361 bears and have a very active campaign specifically designed to end bear farming. While I've seen unimaginable suffering I've also met some awesome individuals and have written about them in some of my previous essays. As a wonderful example of what the Animals Asia team accomplishes, consider Jasper, who, after spending 15 years of torture in a tiny crush cage, has become an ambassador for forgiveness, generosity, peace, trust, and hope (pictures of some crush cages and a relaxing Jasper can be found here). Jasper welcomes new bears into the rescue centre, breaks up fights, and plays with others who were lucky enough to be rescued. While tears flow for many other captive and rescued bears, individuals like Jasper bring smiles to our face and give us hope for the future.
Clearly, it's time to end bear farming now and a petition can be found here."
But hundreds of thousands of animals of many kinds suffer just as much mindless cruelty
in Western and Israeli laboratories.
In the "democratic" USA no figures for animal torture can legally be published,
for free speech on animal welfare has been criminalised there.