My English friend asked me about burning peat in his stove.

There is no peat now generally sold for burning in England.  Here is my reply.

Don’t – if it is in the form of compressed briquettes from Ireland (or Scotland ?).  In any case, peat isn't suitable for an enclosed stove as it will either burn away too quickly or not produce any heat.

As with commercial plant compost, peat briquettes are the result of scraping peat by heavy machinery off low-lying flat moorland (i.e. the Great Bog of Allen in central Ireland) and are the result of ecological and archaeological destruction.

Because of Ireland's lack of coal, the Irish pioneered peat-fired power stations after independence in 1922. During the later ‘economic war’ with Britain and, subsequently, World War II, coal could not be imported from Wales.   Three peat-fired power-stations are still in operation in county Offaly.

Malcolm and I both occasionally (and separately) burn hand-dug peat - from county Monaghan and offered door-to-door from a man in a van. 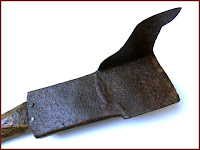 It has to be dug with great effort with very special spades  (about which whole learned books have been published), then thrown up onto the moorland, stacked in little piles, 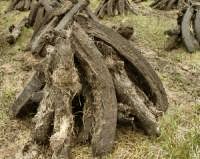 then collected and put into a big turf-stack [turf is Irish-English for peat - compare with French tourbe] to dry, then covered with a tarpaulin or corrugated iron - or whatever is available.  It is not cheap now (obviously) and doesn’t give off great heat – but does give off a lovely smell, and burns slowly, so it is possible to keep an open fire in overnight.  It was the main source of fuel in rural Ireland until the 1980s.

The Irish had very wide chimneys in their traditional cottages, so most of the heat went straight up, but if you had a cooking-pot over the fire making Irish Stew (which was made over 7 days), and crouched near the fire (with your warm dog), it was fine if you were wearing several layers of clothing.  I have been in such cottages, where the half-door was also open a good deal of the day, thus encouraging the smoke, with the heat, to go up the chimney.  Rather dense griddle-bread (made with baking soda, not yeast) was also baked over turf fires.  I have eaten that, too.

For open-hearth cooking-recipes and more information on the harvesting and use of peat in Scotland and mainland Europe, as well as Ireland, click here. 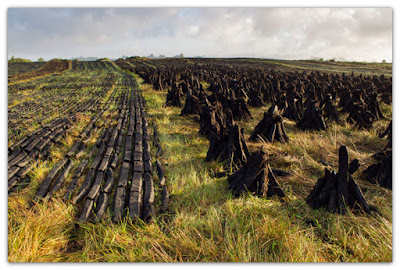 Beautiful and meaningful, thanks for your input. I have been reading a lot about energy and related topics lately, and am appalled that these fascinating issues are now taken for granted amount deskilled professional people…