How to make friends with coyotes. 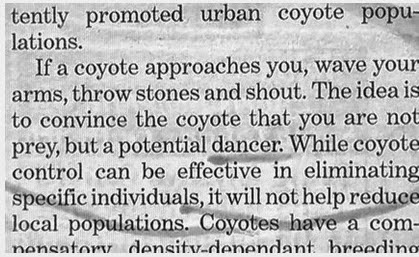 An alpha female coyote whelped her puppies every April in the field on the other side of the wall of our back yard. We could hear them yipping every morning between 4 and 5 a.m. One night at about 8:30 p.m. as I was reading in our bedroom I heard our cocker spaniel racing and then a hideous squeaking expiration from our chihuahua. I ran to the back yard. Two coyotes had jumped the five feet high wall, taken the chihuahua and left the cocker spaniel dying with two gashes in her throat and numerous teeth wounds on one back thigh. The cocker was not dead enough to have been taken. The urban coyotes are and have been a problem in our neighborhood. They are very sleek, large, beautifully furred animals resembling a heavy muscular German shepherd, whose coat is tinged with amber or rust--or Alsatian as the English call German shepherds, nothing like their scrawny mangey Arizona desert neighbors from whom they came. It is not human adults dancing with them or scaring them off (I did merely by going in the back yard), it is two-year-old toddlers playing in their back yards, and all small dogs. They have ravaged our possum population, eaten all our skunks, and managed most of our feral cats, a wiley one having survived. The county Wild Life Agency refused to do anything, but then came out and shot five alpha females. For now, the coyotes have gone from my neighborhood, but it is estimated there are 5000 in the urban LA area. The coyote is a revered trickster by the Navajos.