for guitar and pre-recorded tape
by Juan Piñera

- a cassette-recording taken from a BBC Radio 3 broadcast
(in the early 1990s) of pieces from the
Havana International Guitar Festival of the previous year. 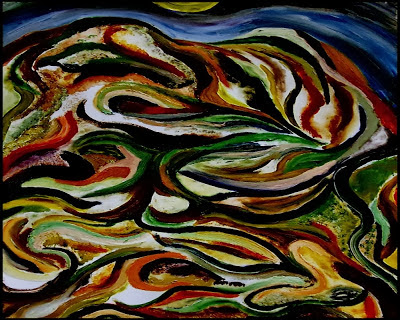 click on the painting above by Malcolm Walker
and on the subsequent enlargement to listen,
or click here to listen without an image.

Juan Piñera was born in Havana in 1949, and was one of the founders
of the Cuban Laboratório Nacional de Música Electroacústica.

I discovered that this marvellous, atmospheric piece is not on YouTube,
not recorded commercially,  nor could I find it elsewhere on the web,
so I uploaded as an mp3 file  it to Grooveshark.

The programme on which I heard the piece was due to be repeated. So I resolved to record the repeat recording. But for some reason it was cancelled - so I wrote to Radio 3 and asked them to broadcast it again, as promised - which they did.

The BBC has been my marvellous auntie all my life. I have no hesitation in saying that I am "a child of the BBC", and owe to it much of my real education - which continues, now mainly on Radio 4.