(which are internal)
were often added to tobacco
(which King James
declared to be infernal)
because of their allegedly
analgesic properties -
and to sweeten it.
The fur was made into coats & headgear.
As for the rest of the poor beaver,
who or what would have eaten it ?

Answer: Everyone.
Because the infallible Catholic church
declared the rodent to be a fish
it was eaten on Fridays and fast-days,
especially in Québec. 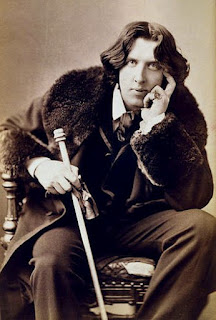 Oscar Wilde in a beaver-fur coat.
Hard Labour in Reading Gaol was too lenient for such a heartless, upper-class æsthete -
but, alas! he was condemned for the wrong crime.

Actually, one of the slang words for French Canadians is beaver beater.
Could be also, beaver eater, but that can apply to many other men and women :)

Yes 'beaver' is a (now disappearing) synonym for 'pussy', 'snatch', 'dirt-box' and many other such charming expressions.

Beaver-balls were also considered contraceptive, as well as analgesic. They might well have been slightly analgesic, since beavers eat a lot of willow-bark, containing salicylic acid. But why contraceptive ?