At four o'clock in the afternoon
on the 27th of May, 1992,
a couple of months into the
four-year-long Siege of Sarajevo,
Bosnian Serbs fired mortar-shells
into a bread-queue.
Twenty-two people were killed
and over seventy were maimed.

For the next twenty-two days,
at four o'clock in the afternoon,
Vedran Smailović, a gifted
local cellist, went to the scene of the 'incident'
and played Albinoni's Adagio in G minor
(which was reconstructed from
a burnt fragment found in the ruins
of the Dresden Music Library
in 1945) as a salute to the dead.

Mr Smailović (whose surname
derives ultimately from Yishma'el, יִשְׁמָעֵאל)
was able to leave Sarajevo in 1993,
and now lives in Northern Ireland,
surely that sub-state's bravest
and most poetic inhabitant.

He is saluted, in his turn, in THE CELLIST OF SARAJEVO, a novel by Steven Galloway,
himself an Australian who lives in Western Canada.

See the vimeo about his return to Sarajevo in 2012, where he played a piece written for him by the English composer Nigel Osborne. 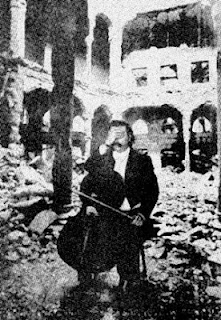 [If you are puzzled by the title of this poem, it refers to Federico del Sagrado Corazón de Jesús García Lorca's, A los cinco de la tarde, ('At five o'clock in the afternoon') his most famous poem,
about the execution of government supporters by the rebel fascist militia of General Franco, who subsequently went on to rule Spain murderously and with full Vatican (and Anglo-American) collusion for the next forty years.]