The War against Nature

In Helmand, in the 1970s,
Americans tried to create
an irrigated Afghan Eden.
Of course, they failed.
The ground turned saline,
dams and channels cracked,
and almost the only plant that thrives
in such a place sprang up : the poppies.
Poppies of Afghanistan,

larger and more succulent
than those of Flanders Fields,
of martial remembrances of war and lies,
(and tales of babies bayoneted out of wombs),
which yield the poppy-seeds of Jewish feasts
and ancient tombs.

Poppies - reviled as weeds - hardly grow
where agriculture's at its meanest:
they are almost rare in Ireland,
for example (though
that isle is full of mushrooms),
but in Afghanistan they flourish
just like (though in a different way)
the dandelions that Europeans constantly
cut down, uproot and spray,
and which forever will rise up another day. 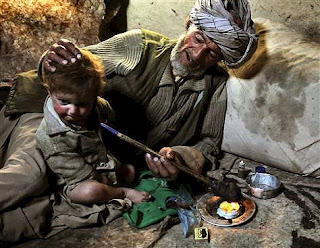 Like this poem very much. the photo and the photos in the linked blog remind us all that human nature, addiction and suffering of poverty is world wide. And the dandelions will always rise up again...... Thanks