Chagos - an archipelago in the Indian Ocean. 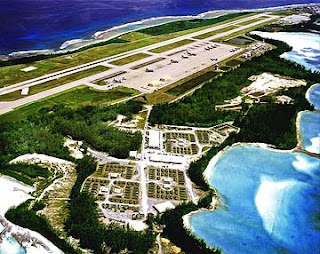 
The Chagossians used to fish with water-loving dogs
before they were expelled from their lovely islands
by a British 'socialist' government which lent
the archipelago in perpetuity to (who else ?) the USA.

The Chagossians were sent to live in shanties
on Mauritius and the Seychelles.
The dogs were rounded up and gassed en masse,
just 20 years after the Germans
so notoriously did the same to Gypsies, Jehovah's Witnesses, Queers, etc.

Coral became concrete.
The largest island, still an American Base
that no Outsider eyes can gaze upon or criticise.
bristles with antennæ and stuff with which to spy
on you and me, our neighbours and our neighbours' dogs;
the archipelago has been designated the world's largest
Marine Conservation Area - so that if ever the Chagossians are allowed -
by the European Court of Human Rights - to return,
they will not be able to fish,
and will have to live in forced poverty
on miserable hand-outs
and notorious British colonial charity.