"Our silent ambassador to the stars." 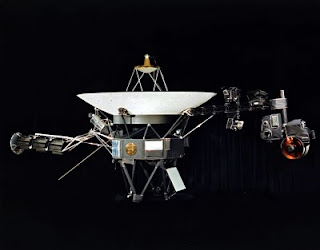 "Each Voyager probe is famously equipped with a Golden Record, literally, a gold-coated copper phonograph record. It contains 118 photographs of Earth; 90 minutes of the world's greatest music; an audio essay entitled Sounds of Earth (featuring everything from burbling mud pots to barking dogs to a roaring Saturn 5 lift-off); greetings in 55 human languages and one whale language; the brain waves of a young woman in love; and salutations from the Secretary General of the United Nations. A team led by Carl Sagan assembled the record as a message to possible extra-terrestrial civilisations that might encounter the spacecraft.

"A billion years from now, when everything on Earth we've ever made has crumbled into dust, when the continents have changed beyond recognition and our species is unimaginably altered or extinct, the Voyager record will speak for us," wrote Carl Sagan and Ann Druyan in an introduction to a CD version of the record. Some people note that the chance of aliens finding the Golden Record is fantastically remote. The Voyager probes won't come within a few light years of another star for some 40,000 years. What are the odds of making contact under such circumstances? On the other hand, what are the odds of a race of primates evolving to sentience, developing spaceflight, and sending the sound of barking dogs into the cosmos ?

Not to mention trashing their planet out of sheer and stupid greed!