The problem is not the suffering, but the inconvenience caused by the struggle to end it.

"While the [British] miners were on strike in 1926 [against reduction of pay] a great many people were moved to listen to their case.
Certain high ecclesiastical dignitaries went even so far as to offer to mediate between the mine-owners and the miners.
They were convinced that the terms the coal owners weree attempting to impose upon the miners were unreasonable and would entail much suffering and poverty for hundreds of thousands of miners' homes.
Their efforts failed. The miners were beaten and driven back to work under disgraceful conditions.

"For years these conditions continued. But were those high church dignitaries moved to intervene then ?
Not at all. For them the problem was solved. It had never consisted in the suffering of the miners, but in the fact that the miners were still able to struggle, and therefore created a problem for the rest of the community.
The problem was not their suffering but their struggle."

More from that excellent book: 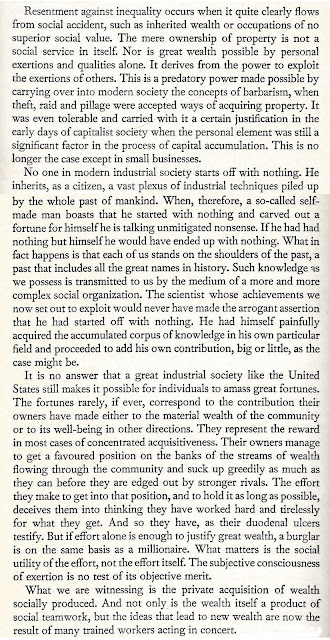