Since 1905 the French Republic has proclaimed and insisted
on its solid  'secularity'.  But  'wayside' crosses* are everywhere;
minarets are very rare, and it's hard to find a calendar
without all the Christian saints' feast days listed.

*Thousands of wayside crosses, mostly grotesque, many made of iron,
were erected during the Catholic Church backlash against the Third Republic
before the secularisation law of 1905.  Few have been erected since that date.

Below is one of the more elegant examples,
close to where I live, and built, in the Christian tradition, on top of a 'pagan'
(and ruined) megalithic tomb. 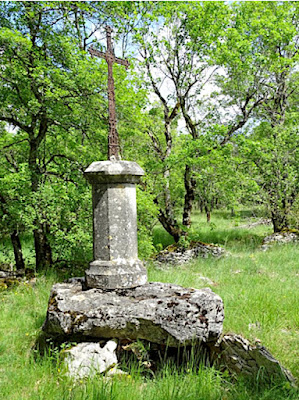 But it was removed (by a fellow-megalithophile ?
- if so, why leave the concrete pillar, incongruously,
on top of the sad little tomb ?  To stop people
tripping over it ?)