How much further is farther ?

Columkilly, the dark Irish sorcerer
who preceded Njál and other Norse
in Iceland, became a demon of the sub-arctic deserts
and a coffee-drinker, thanks to the glottal-stopping,
whale-overwhelming Danes.
Imagine! Coffee from Arabia to starving, colonial Iceland :
such is Trade - amber from Bornholm to Istanbul...
diamonds and uranium from Ubangi-Shari to the Seine...
coltan from the Congo to Korea...
slaves from the Slave Coast to America (north and south),
'a land farther than death', according to Halldór Laxness,
whose middle name was that of another Irish saint
and who would have been amused to hear
that, in this photo on the jacket of Independent People*,
he seems to me to somewhat resemble Hitler. 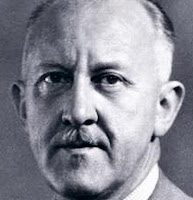 *A very funny and sardonic book about Sheeple,
specially appealing to Icelanders and Irish
(Iceland was almost Denmark's Ireland)
but whose English edition was clunkily
translated by a man with a Tin Ear.
The Danish translation is (of course) much better,
but the book could fit very well into Irish,
the tongue of Columkilly,
predecessor, conqueror of the Æsir.

'A man who is not his own master is as unfortunate as anyone without a dog.'